New Moon Junction, the Ontario-based trio of Barb, Tamara, & Brad  introduced themselves to the Canadian Country music scene in 2021.  They quickly made a name for themselves and have been called, “Ontario’s best kept secret”, “Country’s Hottest Trio”, and “Canada’s Lady A”.  Their first single “Real Good Kinda Thing” was released in February 2021.  They followed up with a summer release titled, “The Other Side of Goodbye”,  and “Don’t” in February 2022, both of which were received with excitement and enthusiasm by their new and growing fanbase.  They have been invited to perform at a number of shows where music fans have had the chance to experience their high energy live performances backed by some of the industries finest musicians.  The Trio is set to release their newest single “Mind Of It’s Own” in early 2023.  It’s delivered with their unique blend of harmonies and a seamless combination of new and old school country crafted to perfection by Multi-platinum selling producer Jeff Dalziel.  As the group continues to expand their fanbase and gain momentum you can expect to hear more great music coming your way. 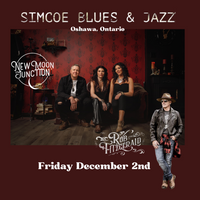 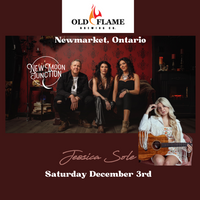 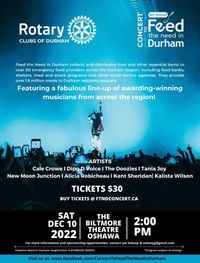 Concert To Feed The Need in Durham

The Concert to Feed the Need in Durham has a new home! On Saturday, December 10th at 2 pm, musicians from across the Durham Region will gather in the Biltmore Theatre in Oshawa to help feed their neighbours in need -- and the need has never been greater. Due to circumstances, we've had to change gears a bit, moving around the corner from the soon-to-be opened Music Hall on Bond to the Biltmore on King. The lineup includes The Doozies, Tania Joy, Cale Crowe, New Moon Junction, Alicia Robicheau, Kalista Wilson, Hunter Sheridan, Dipo D Voice and more. Gonna be a great show for a great cause!